CHI@MTL: Five things you need to know
The Canadiens will be looking to win their third straight game on Wednesday night at the Bell Centre
by Matt Cudzinowski @CanadiensMTL/ canadiens.com
11:52 AM

MONTREAL - Here are five things you need to know ahead of Wednesday night's matchup against the Chicago Blackhawks at the Bell Centre.
1. The Canadiens are riding a two-game winning streak into the first of two regular-seasons meetings with the Blackhawks. After besting the Senators over the weekend in overtime, Claude Julien's squad followed that up with a 2-0 victory over the Calgary Flames on Monday night. Jordan Weal and Ryan Poehling scored for Montreal, while Carey Price turned aside 31 shots to register his second shutout of the season. It was also his 46th shutout in a Habs uniform, tying him with Hall of Famer Ken Dryden for third spot in franchise history. Only Jacques Plante (58) and George Hainsworth (75) sit ahead of Price in that department. 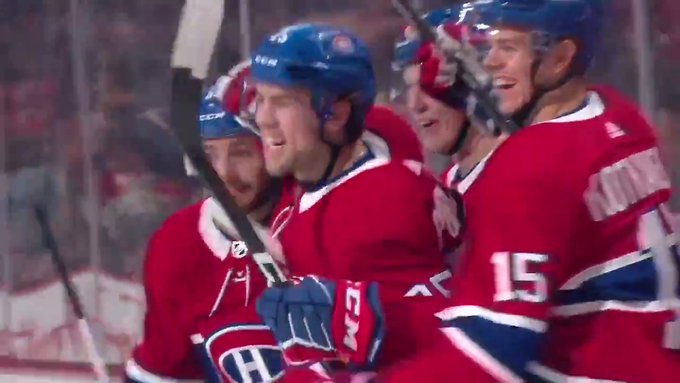 91 people are talking about this


2. Charlie Lindgren will get the start in goal against the Blackhawks. It will mark his third start of the season with the Canadiens. His last outing came on January 7 in Detroit when he turned aside 26 shots in a 4-3 loss to the Red Wings. Up front, Joel Armia will be unavailable versus Chicago. He is still out with an upper-body injury, but was on the ice for the optional skate at the Bell Sports Complex. Armia's return date is still to be determined.

Claude Julien confirms Lindgren will get the start in goal tonight. Armia won't be in the lineup.#GoHabsGo

68 people are talking about this


3. Newcomer Ilya Kovalchuk has been a solid addition to the Canadiens' fold since coming on board earlier this month. He's certainly making his presence felt on the ice, but he's been equally good away from the rink as well. His daily carpooling with defenseman Victor Mete is a good example of that. Mete is learning a lot from the Russian sniper while getting to know him. And regardless of their significant age difference, the pair already has a lot in common...

Mete: Carpooling with Kovy
Getting to know Ilya Kovalchuk has been a really enjoyable experience for Victor Mete.
nhl.com

16 people are talking about this


4. The Blackhawks picked up their second consecutive win on Tuesday night, downing the Senators 3-2 in overtime in Ottawa. Jeremy Colliton's squad rallied from a 2-0 deficit after 20 minutes of play. Dominik Kubalik scored once in the second period and once in the third, before captain Jonathan Toews secured the victory in the extra frame with his 12th goal of the season. Toews ranks second on the Blackhawks in scoring with 38 points (12g, 26a) in 47 games. Patrick Kane leads Chicago in that department with 59 points (24g, 35a) on the year.
5. Puck drop is scheduled for 7:30 p.m. You can watch the game on Rogers Sportsnet and RDS, and listen to all the action on TSN Radio 690 and 98,5 fm. To purchase tickets, click here. Following the contest, the Canadiens will travel to Philadelphia where they'll battle the Flyers on Thursday night at the Wells Fargo Center.

Of course Crawford didn't start last night so he could shutout us out tonight.

Lindgren fucks up behind the net and it's 1-0 Hawks.

Staff member
That was ugly

hairnova said:
Lindgren fucks up behind the net and it's 1-0 Hawks.
Click to expand...

Tatar didn’t help out, to blame as well

How did Mete miss that...

Quite the pass by Kovy.

Lindgren had lost his blocker and was falling all over the place...

Domi again with a silly penalty. Not sure if we should re-sign this guy.

Thought Danault had another one there...

wiseguy1 said:
Domi again with a silly penalty. Not sure if we should re-sign this guy.
Click to expand...

Yeah... who needs a guy who can lead the team in scoring play big and deal with the fish bowl that is Montreal LOL!

Julien would cut his nose off to spite his face. Scrubs like Cousins and Weal can shit the bed and take a regular shift. Domi, last years leading scorer and key cog in the PP sits off in a CRUCIAL PP at the end of the period. Clown.

I don't care, Domi is a meat head much too often. Sick of his antics.

Habs4Life said:
Julien would cut his nose off to spite his face. Scrubs like Cousins and Weal can shit the bed and take a regular shift. Domi, last years leading scorer and key cog in the PP sits off in a CRUCIAL PP at the end of the period. Clown.
Click to expand...