VAN@MTL: Five things you need to know
The Habs are hoping to string together their third win in a row as they welcome the Vancouver Canucks to town on Tuesday
by Dan Braverman @CanadiensMTL/ canadiens.com
7:00 AM

MONTREAL - Here are five things you need to know ahead of Tuesday night's game against the Vancouver Canucks at the Bell Centre.
1. The Canadiens are coming off a 3-0 win over the Ottawa Senators on Saturday to close out their three-game road trip. It was their second win in a row after they beat the Washington Capitals in overtime on Thursday night. Against the Sens, Max Domi snapped a nine-game goalless streak with a pair of goals, while Paul Byron scored his first goal since returning and added an assist against his hometown team. Carey Price made 30 saves for his 48th career shutout, placing him in a tie for sixth among active goalies in the NHL.

ICYMI: Carey Price and the Canadiens blanked the Senators on Saturday night.#GoHabsGo 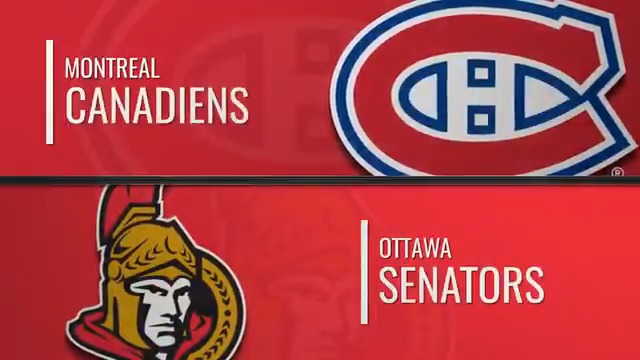 24 people are talking about this


2. Montreal's lineup will look a little different on Tuesday night, as it'll be the club's first game since the NHL's trade deadline the day before. The Habs shipped Ilya Kovalchuk to the Washington Capitals on Sunday. On Monday, they sent Nate Thompson to the Philadelphia Flyers and Nick Cousins to the Vegas Golden Knights. They also recalled forward Jake Evans from the AHL's Laval Rocket. With all the changes coming up front, we'll have to wait until morning skate to learn more about head coach Claude Julien's plans for his lines for the Canucks game.

The Canadiens have acquired the Washington Capitals' third-round pick in the 2020 NHL Draft, in return for forward Ilya Kovalchuk.#GoHabsGo 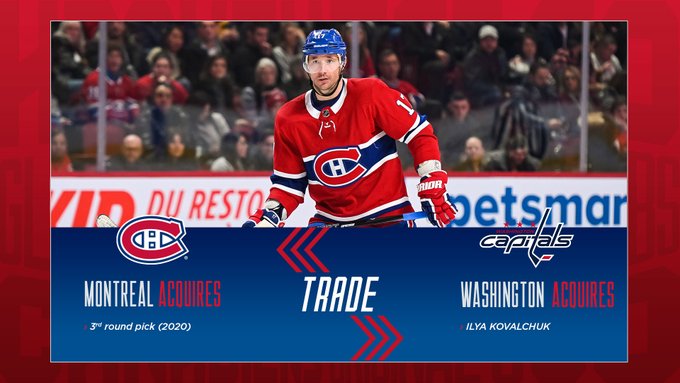 1,226 people are talking about this


3. Tuesday's game is also LGBTQ+ Night at the Bell Centre, as part of the NHL's Hockey Is For Everyone Initiative. It's an opportunity for the club to express support for people of different sexual orientations, gender identities and expressions, and to emphasize the importance of respect and inclusion of the lesbian, gay, bisexual, trans and queer (LGBTQ+) community in sports. During warmups, Habs players will be sporting rainbow-colored jerseys and using Pride tape on their sticks, with the jerseys and sticks then being auctioned off to raise funds for the You Can Play Project and GRIS-Montréal, two LGBTQ+ advocacy organizations. Fans wishing to purchase one of these one-of-a-kind items can register to be notified when the special auction powered by IBM opens by visiting lgbtq.signaturepro.ca or by texting "LGBTQ" to 438-600-2832. Before the game and during intermissions, You Can Play and GRIS-Montréal representatives will be present at the community kiosk behind section 104 to provide information, while the players' spouses will join them pregame to distribute rainbow Canadiens temporary tattoos and to animate a themed photobooth.

The Montreal Canadiens celebrate hockey under the themes of respect, diversity and inclusion on Tuesday.#GoHabsGo @YouCanPlayTeam https://www.nhl.com/canadiens/news/montreal-canadiens-celebrate-hockey-under-the-theme-of-inclusion/c-315495216?utm_source=twitter&utm_medium=post&utm_campaign=CHCcontent&utm_content=EN-0224-PrideNightRelease …

Montreal Canadiens celebrate hockey under the theme of inclusion
As part of the NHL's Hockey Is For Everyone program.
nhl.com

47 people are talking about this


4. The Canucks closed out a five-game homestand on Saturday with a decisive 9-3 win over the Boston Bruins. Newly-acquired forward Tyler Toffoli, playing in his second game since joining the Canucks via trade, scored his 19th and 20th goals of the season, while Elias Pettersson scored his 25th of the campaign. Pettersson is second in team scoring with 59 points behind JT Miller, who padded his lead with three assists against Boston to ring up his totals to 62 points (24G, 38A). Rookie Quinn Hughes is third on the Canucks, and his 49 points (8G, 41A) currently rank him first in the NHL's rookie scoring race this season. This is the second and final meeting between the Canadiens and Canucks in 2019-20, with Montreal beating Vancouver 3-1 in British Columbia back on December 18.
5. Puck drop is scheduled for 7:00 p.m. You can catch all the action on TSN2, Sportsnet Pacific, and RDS on television, and on TSN 690 and 98,5 fm on the radio. For tickets for the game, click here.

I was going to ask the same question

because its LGBQT+ night?

Saw some Canucks fans chirping on twitter. Decided to check their history...

Canucks have participated in 48 seasons.

Missed playoffs or out in 1st round 77.08% of their existence LOL!

This can't be a coincidence right?!

I see there’s been zero improvement in Hughes defensive awareness since his prep school days.

Just taking faceoffs I think... Danault, Suzuki, Domi and Evans are the centers.

wow they looked like a bunch of idiots in OT

Price should have covered that one puck in OT. Keeping the play going was a mistake for sure.

Staff member
At least we only got a point.

They suck. Another in a long line of blown games this season.

Yup. Painfully stupid. Byron is usually reliable, but Domi and Petry have regular brain farts. This was brain fart squared.

The Artist Formerly Known as chiggins.

Could have used the Cuz tonight
K

Habsy said:
They suck. Another in a long line of blown games this season.
Click to expand...

Too bad they got a point out of it.

Krustchev said:
Too bad they got a point out of it.
Click to expand...