Babs had some big comments for goat and shore yesterday. Said they were filling a need that the team had been trying to trade for for the past 4yrs.

He's not wrong. Shore is legit good as a 4th liner and Goat should be donating 50% of his salary to Barb for turning him into a player.

MindzEye said:
He's not wrong. Shore is legit good as a 4th liner and Goat should be donating 50% of his salary to Barb for turning him into a player.
Click to expand...

Shore is exactly the good possession defensive player we've been looking for from our 4th line. Not the physical bad possession player that babs has usually loved.

Goat? I still can't believe it but he's actually turned into a beast....for 8gms at least.
S

How goes it work with the cap while JT is out and replaced with spazza salary? Do we save anything that doesn’t push us to the brick once team is healthy?

Maybe the KHL excursion was meant to be.

Once Hyman and Dermott come back, wouldn't be shocked if the Leafs make a deal. Team has some skill to move to shore up other needs.
S

Soup and Moore’s performances could have a bigger name being traded for cap space in the nearer future than I anticipated.

If you're talking about the Leafs trading a forward who's making actual money, the only two possibilities really would be Johnsson & Kapanen. And I'd be surprised if Dubas was willing to move on from one of those guys yet.

I really think all of his manoeuvring throughout the summer was to figure out a way to keep all of Matthews, Marner, Nylander, Tavares, Johnsson & Kapanen up front (and now Kerfoot as well).

The fact that we have so many NHL depth guys signed this summer making under $800K (Shore, Petan, Wilson, Agostino, Aberg, Kivihalme, Schmaltz, Gravel, Marincin) leads me to believe that Dubas is fully intending to take advantage of the cap loophole that lets you recall these guys without it counting against the cap if you're forced to ice less than a full lineup for a game.

The only tough decision will be prior to that, when in addition to demoting Gravel & Petan (who don't need waivers), you'd also need to waive or trade one each of Spezza/Shore and Marincin/Holl. I suspect Dubas will just throw Shore & Marincin on waivers, with the expectation that they'll probably clear. And then those guys might even be the guys we call back up with our "emergency recall".
Last edited: Oct 20, 2019

They need to shore up the goaltending.
P

Yeah it they can find a young cheap cost controlled Freddy for 2-3 shmil, that would be ideal. That way you can ride the tandem for the next couple years till you say bye to Freddy. But it's one thing to want it, but those guys have to be available too. They not always are.


The other option is a cheap cost controlled young rhd. Once again... Not always available but they'd be fucking wise to keep on the lookout for one. No reason to necessary shop Johnny or kappy but it's eventually going to be the obvious move to make. If the ideal fit becomes available earlier than you expected, that doesn't mean you hold off on the deal. Obviously Johnny and kappy may well cost 6+ in three years plus they'd have to expose one in the expansion draft no? Could be wise to be proactive. Essentially they have two years to trade one or both of them. No reason to rush it but no reason to turn down a terrific deal either.
Last edited: Oct 21, 2019
L

Mike Babcock is running the Maple Leafs’ bench differently this season. That much is clear even after only nine games.

One very notable change: how the Leafs coach is deploying his forwards.

No doubt with the numbers firmly behind him, Babcock is loading up Auston Matthews and John Tavares, before he got hurt anyway, with more offensive-zone starts — and fewer starts, not by accident, in the defensive zone.

“We just find that otherwise, your best players are always starting in your zone,” Babcock said last week. “Any way you look at it, the math doesn’t add up as good as if you start in the O-zone.”

Matthews’ 71 percent offensive zone-start percentage is among the highest in the league for a forward and a more-than-noteworthy uptick from 58 percent last season and 49 percent a year before.

Before the broken finger that has him out until November, Tavares was at around 60 percent himself in offensive zone-start percentage, up from 51 percent last year. Instead of worrying about matching Tavares with opposing top lines, Babcock said the focus instead is “more about O-zone and D-zone start.”

Cue the emergence of Frederik Gauthier and a fourth line Babcock feels like he can finally trust, because as the Leafs coach said, “I gotta have someone else to do the other part.”

Gauthier has already lined up for 58 five-on-five defensive-zone draws so far, among the most in the league, right up there with other defensive dudes like Radek Faksa, Nick Bonino and Luke Glendening. Matthews has been out there for only 23 and Tavares, by contrast, has taken 27.
Click to expand... 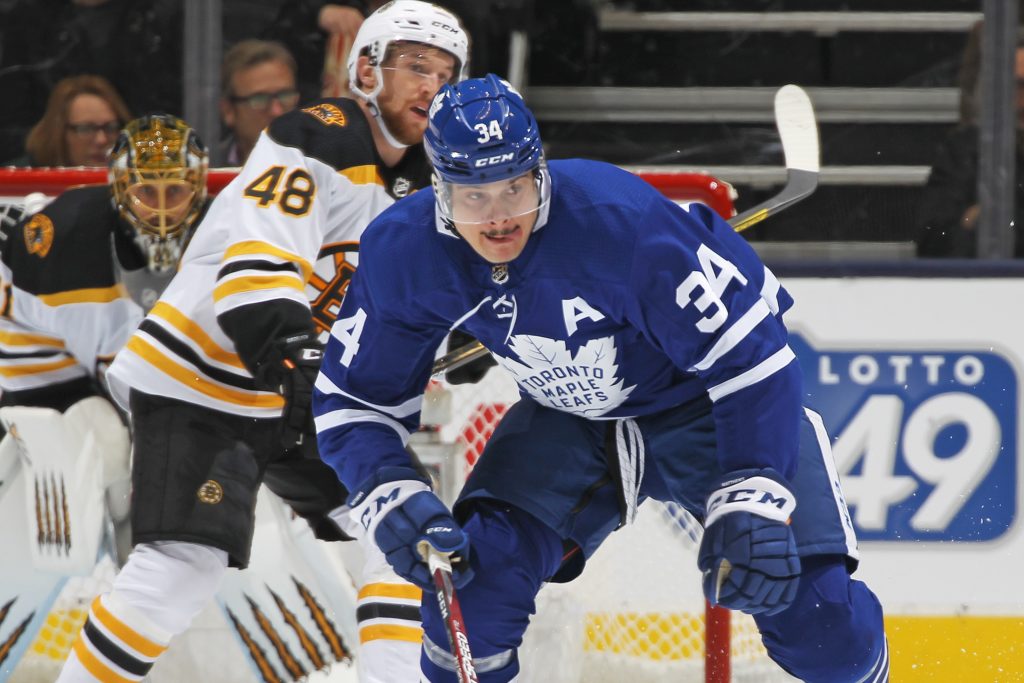 Plus, Babcock addressed whether he gave any consideration to moving William Nylander to centre with John Tavares out.

I felt he was playing with fire a bit on Saturday, starting Goat in their own zone against the Bergeron line multiple times. That will burn you more often than not I think.

Checking cap friendly last night and I think for sure we'll only be able to carry 21 guys in a couple weeks.

Guys we won't waive will be a Moore-goat-timashov 4th line, and I think Holl has won the #6D spot for now, until they want to call up Lilly.

But that leaves them only 900k in space to sit in the press box - I.e. only one player.

So only one of Spezza, Shore, or Marincin can stay.

Usually it's more urgent to keep the extra D instead of the extra F, so Spezza's future becomes a big question mark.
P

zeke said:
Checking cap friendly last night and I think for sure we'll only be able to carry 21 guys in a couple weeks.

Guys we won't waive will be a Moore-goat-timashov 4th line, and I think Holl has won the #6D spot for now, until they want to call up Lilly.

But that leaves them only 900k in space to sit in the press box - I.e. only one player.

So only one of Spezza, Shore, or Marincin can stay.

Usually it's more urgent to keep the extra D instead of the extra F, so Spezza's future becomes a big question mark.
Click to expand...

But Spezza is on the cap regardless, no? They can't waive him/send him down - they'd have to trade him I believe.

Guessing Marincin and Shore will be sent down but that's a tough one for me.
L

If the plan is to use the 4th line for dzone draws, they'll probably want to keep Spezza/Shore on there.

That might actually be a real problem - we may not even be able to use that emergency call up for a short term D injury if spezza is sitting there in the press box.
P

According to Capfriendly, 35+ contract rules only apply to multi year deals:

What is a 35-plus contract?
If a player signs a multi-year contract and is age 35 or older (as of June 30 prior to the year of the effective contract), the players individual cap hit counts against the teams cap hit regardless of whether, or where, the player is active. However, there is one circumstance in which there is a cap hit reduction, a team will receive a $100,000 relief off of the teams salary cap hit, if a player is playing in the minor leagues after the first year of their contract.
Click to expand...

What happens capwise if we waive spezza?

Just need Spaz to announce his potential retirement, and get sent down.